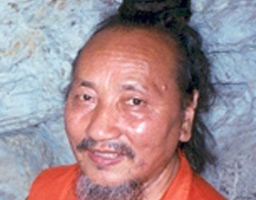 Drubpon Trinley Yeshi Rinpoche has in the past served as the head retreat master at the Drikung Kagyu Institute in India. He was born at Drikung Yangre Gar in 1941, near the village of Trolung. His father is Dang Drung and his mother is Dolma. At the age of 12 he took the novice monk vows from H.E. Thritsab Thubten Wangpo (the former Thritsab Rinpoche). Afterwards he became perfectly well trained on how to play ritual instruments, how to chant, perform ritual ceremony, and the traditional Lama dance. At the age of thirty he took the full ordination vows from late master Pachung Rinpoche; hence he has received many teachings from Pachung Rinpoche and his close disciple, fully ordained Tenzin Nyima Rinpoche.

Under the guidance of Pachung Rinpoche and Tenzin Nyima Rinpoche, he has perfectly completed his three-year retreat on the Five-fold path of Mahamudra and Six yoga’s of Naropa at Drikung Thil Monastery.After his beloved Pachung Rinpoche passed away, he constructed a commemoration Stupa for his teacher. He has also performed many ritual ceremonies for his teacher through his body, speech and mind, uninterruptedly. Rinpoche is someone who was able to please his teacher with his enthusiasm in the practice of Dharma. For three years he has done a strict sealed retreat on Mahamudra, day and night. Read more…

During 1992, Rinpoche received all the Drikung Kagyu lineage empowerments and oral transmissions from various Drikung Kagyu masters, in particular from H.H. Chetsang Rinpoche during the Monkey Year teachings. He has also received teachings from different masters, in particular from H.H. Dalai Lama. Afterwards he went on a pilgrimage to holy places of the Buddha in India. Then H.H. Chetsang Rinpoche asked him to lead the Three-year retreat for Rinpoche’s monks and nuns. Meanwhile His Holiness appointed Rinpoche as one of the head retreat masters in the Drikung Kagyu Lineage. At that time, he was also appointed as Dorzin (The representative of the head of lineage) for the holy place of Labchi.

In the year 1996, he led the traditional three-year retreat, hands-on instruction from the late Drubwang Pachung Rinpoche to twenty-three monks and nuns including H.E. Thritsab Rinpoche, Senge Tenzin Rinpoche, Lama Kunsang Rinpoche, Konchog Khandro, Lama Konchog Sangya Rinpoche and so on at Almora, India. His Holiness stressed to all the practitioners who were in three-year retreat, that Drubpon Yeshi Rinpoche is someone who has perfected his understanding in the pith instructions and practice. After a successful three-year retreat, H.H. highly praised Drubpon Yeshi Rinpoche for his excellent duty in guiding the three-year retreat in a very skillful and enthusiastic way. In honor of all of his noble activities within the past many years, his many years of sincere practice, and his realization His Holiness honored him with a compliment letter and a recognition letter of being an authentic retreat master within the Drikung Lineage.

In Spring 2009, Rinpoche made his first European tour to confer Dharma teachings to European Dharma friends. This is Rinpoche’s second visit to Europe. In March 2013, Rinpoche will be in the United States for the first time and will be here teaching the Dharma until the end of August.