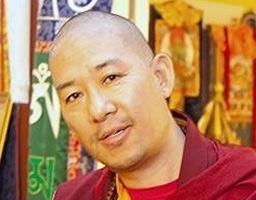 Venerable Lama Konchok Sonam is the Spiritual Director of the Drikung Meditation Center. Born in Lhasa, Tibet, Lama Sonam began his Buddhist training when young within the Drikung Kagyu lineage of Tibetan Buddhism. At the age of 18, Lama Sonam took full ordination and became a monk (Gelong). Lama Sonam then went on to complete a retreat on Ngondro (Common and Extraordinary Preliminaries) and the Five-Fold Path of Mahamudra under H.H. Drikung Kyabgon Chetsang Rinpoche and Gelong Yeshe. Lama Sonam received teachings and blessings from more than twenty-five great masters, including Nyedak Rinpoche, his beloved main teacher, and the Most Venerable Pachung Rinpoche, the renown scholar and retreat master at Drikung Thil monastery.

On June 9, 2003, Lama Sonam arrived in Boston to be the Resident Lama at the Drikung Meditation Center. Lama Sonam has shown himself to be expert in both the theoretical and practical aspects of training the mind through meditation and Vajrayana methods for awakening our Buddha Nature. In the fall of 2005, Lama Sonam started the Jowo Rinpoche Statue Project to benefit the Boston area, the United States, and the world. Lama Sonam began to realize his vision of bringing the blessings of Buddhism, from Buddha Shakyamuni and countless other enlightened masters from the East- India, Nepal, and Tibet, to the United States by creating a pilgrimage site. Arriving in May of 2008, the centerpiece of the pilgrimage site is an eight foot tall gilded, jewel-encrusted bronze, the U.S. Jowo Rinpoche Statue. The magnificent U.S. Jowo Rinpoche statue is a replica and spiritual emanation of the most revered Jowo Rinpoche statue that was made at the time of the historical Buddha and brought to Lhasa, Tibet in 641 AD.– From http://www.drikungboston.org/bios.html